Imagine a skid steer loader with the power and capabilities of world-class loaders, but with only one difference – zero environmental impact.

The KOVACO company, located in the heart of the Pohronský Inovec mountain range, came up with this unique machine and introduced it to the market for the first time in 2018. And when we say unique, we mean it is the only existing electric skid steer loader in the world.

The story of Elise 900 began to be written in the heads of its designers as early as 2014, with the primary aim of designing a universal loader that will meet the criteria of modern times while minimizing the shortcomings observed in other, competing loaders. A company with a long tradition in the production of attachments and welding positioners has produced a competitive machine on the world market, whose uniqueness is underlined especially by its electric drive.

“It was a matter of course for the company residing in the heart of nature to create a machine that is as environmentally friendly as possible for nature and its inhabitants. Not only zero emissions, but also near zero noise at work make Elise 900 the prototype of a modern 21st century loader.”

Not just environmental friendly but also powerfull and more use-full.

The Elise 900 loader is a good assistant for loading, lumping or relocating rocks of classes 1 to 4, all with a basic shovel. Specially designed attachments make it possible to use it also for mining of rocks, digging of narrow grooves or drilling of holes in rocks of 1st and 2nd class. The machine is equipped with towing eyes, thanks to which it is occasionally used as a towing machine 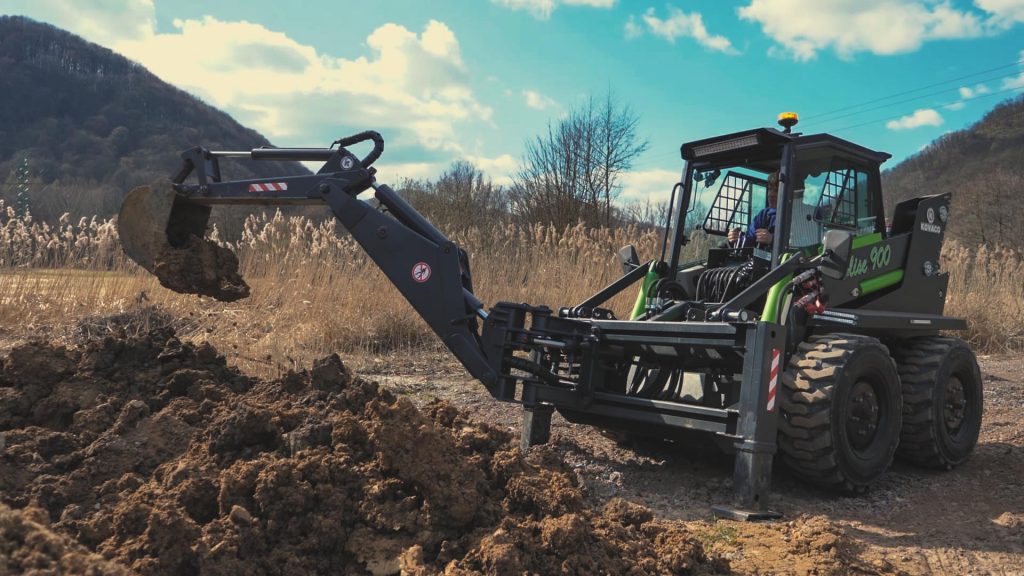 The machine consists of three electric motors, two of which are used for travel and one for the hydraulic system only. There is a planetary gearbox in each wheel that reduces the high speed of the electric motor to the desired travel speed. Low torque is transmitted to the rear gearbox by a rubber belt at high speed. Maximum loader speed is 8,2 mph and as its name indicates, its maximum load capacity is 2000lbs.

The stability of the loader, tested according to the latest technological standards, allows its use in the interior, exterior, but also on public roads or sloping terrain.

. In addition to stability, the chassis height of the machine, which exceeds the chassis height of conventional loaders of a given category by full six centimetres, is above standard. The Elise 900 is distinguished from its diesel colleagues not only by its features but also by its distinctive design.

The designers avoided the projecting rear side, allowing the machine to reach places that are a problem for competing loaders. 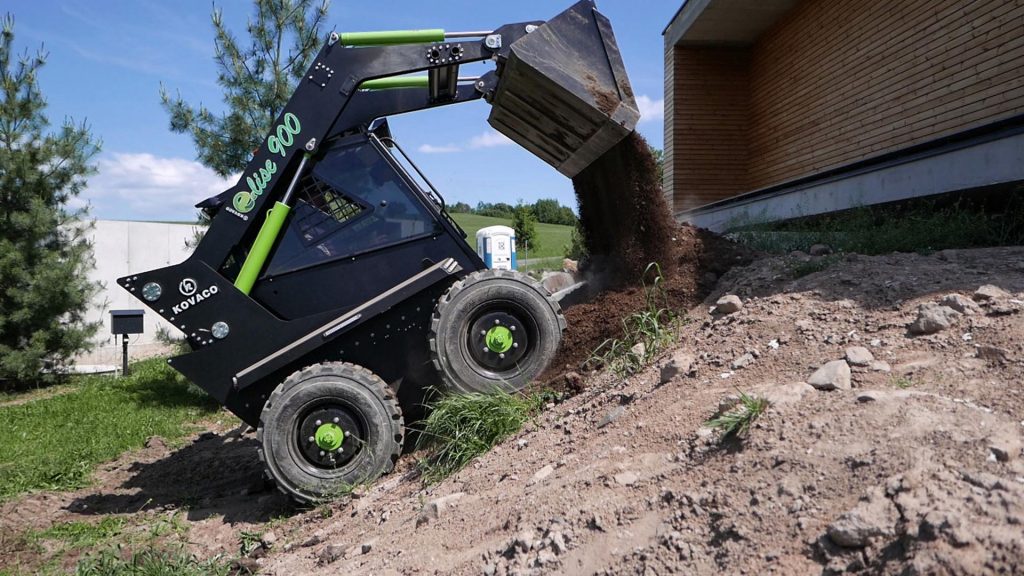 A similarly useful solution that KOVACO came up with is the boom height (3.4 m), which allows the loader arm to reach directly into the centre of the tipper.

What else can Elise 900 offer to his user?

The machine operator has a vertical and horizontal shovel alignment function at his or her disposal that makes it easy to operate. The completely electrical system ensures easy interconnection of the machine with a specially developed mobile application through which it can be operated remotely. The mobile phone, as part of the Elise 900, also serves as a display with all the necessary information.

The clients’ questions are often directed not only at the cost of the machine, but also at its service. During the main service, the entire cab can be tilted with the help of gas struts after unlocking. Quick battery replacement via a pallet truck is easy and saves not only time but also money. This is also reflected in operating costs, which represent one motor hour equivalent to one euro. To sum up, it will save you, on average, fifty euros per working day. 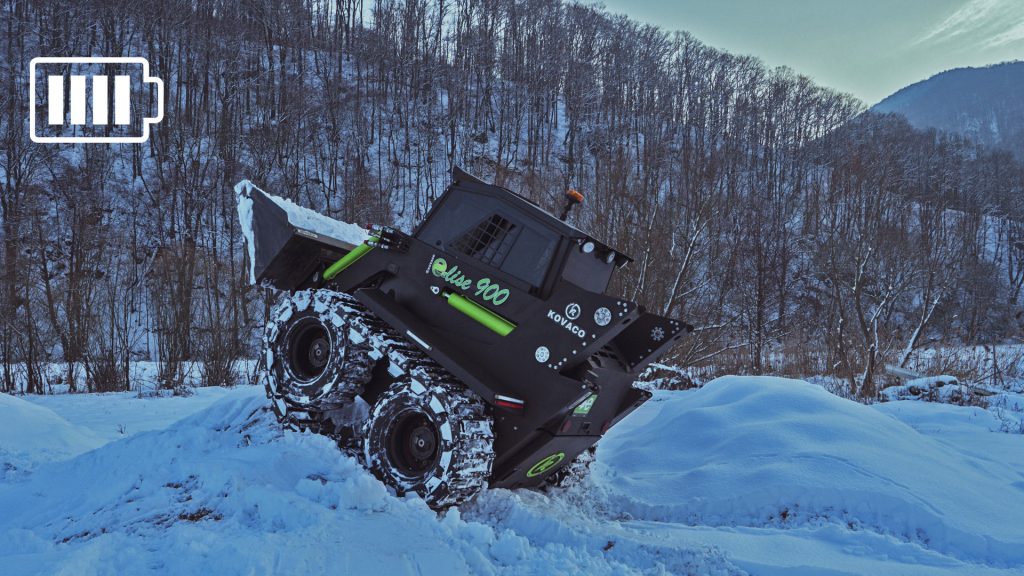 Years of experience of a successful company from Veľká Lehota helped its designers to construct the first electric skid steer loader, which filled the empty space in the loader market thanks to its uniqueness. Due to the possibility of clamping more than thirty attachments, it becomes a versatile, reliable, powerful and above all environmentally friendly machine. This is Elise 900, a unique novelty manufactured by the KOVACO company, ready to make your working day more efficient.

We use cookies to ensure that we give you the best experience on our website. If you continue to use this site we will assume that you are happy with it.OkPrivacy policy